TOP 10
All Time
1
Zero Gravity Got Grounded
2
Griswolds Vocalize “High Times” in New Album
3
The Summer Set Announce Break-Up
4
Fyre Festival Crumbles Amidst Organizational Chaos, Leaving Hundred...
5
On the Dark Side of Festivals
6
Summer Camp : Who, What, Where, When and Why Are We Moving?
7
Bassnectar Leaks Info About 3-Day Bassnectar Curated Camping Festival
8
Album Review: Joytime by Marshmello
9
Chicago To Be Home Of EDC 2015?
10
Electric Forest 2016: Where Our Minds Were Awakened
previous
random
next
Metallica Delivers Super Charged Performance
Event Reviews
4119 views 0 likes 0 comments

Mastodon Performs at the Aragon Ballroom 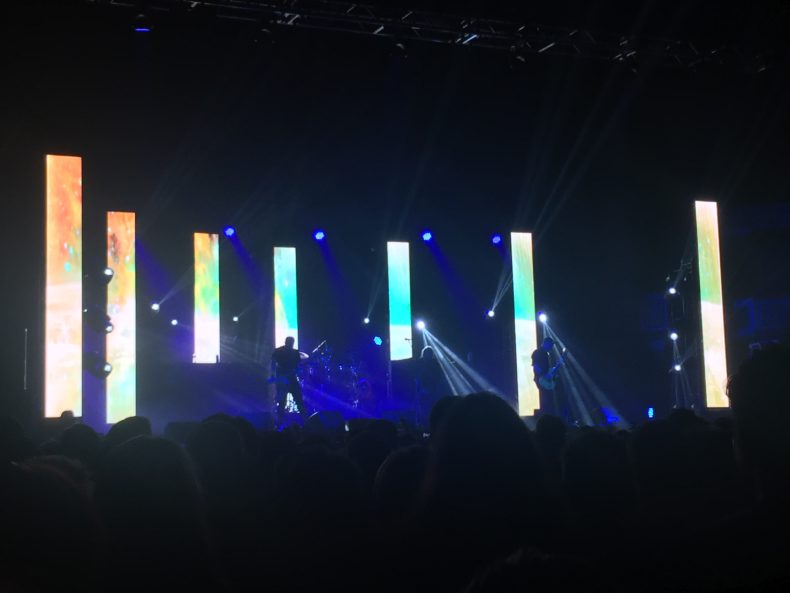 I think it’s fair to say that I listened to Mastodon’s new album, Emperor of Sand, for weeks after its release back in March. Before then, I had only listened to a few of their previous albums, but never felt compelled to fully delve into their discography. But when I saw an advertisement for their show at the Aragon Ballroom pop up on my Facebook feed, I felt like it was only necessary to give this band a shot. By my logic, if I didn’t have a good time I could say that I actually saw them play live and didn’t enjoy it, or have an amazing time. So I took the dive and bought myself a ticket.

That said, I had never listened to Russian Circles or Eagles of Death Metal, both bands set to be the opening acts for the show. Of course, I had heard of EoDM, their name springing to my mind as the band performing at the Bataclan in Paris during the 2016 terrorist attack in the middle of their show. Whatever the case, I sat myself down and listened to songs from both bands before the performance. I found myself neither blown away, but also not disappointed by what I heard. I shrugged it off and decided to show up on time instead of arriving late to the show to skip seeing the opening acts.

The local boys in Russian Circles certainly blew any expectations I had out of the water. Despite having no vocals, their performance showed that this trio were no pushovers when it came to their instruments, giving an excellent show that seemed to certainly engage the crowd and get them warmed up for the rest of the night. But what really made my night was the Eagles of Death Metal.

A rock band in everything but their ironic name, the Eagles of Death Metal put on a show that had reminded me of the classic rock bands that I grew up with mixed with a bit of rockabilly. Opening with “I Only Want You”, the band brought out Mastodon’s lead guitarist, Brent Hinds as a guest appearance. The amount of energy brought by the band had me banging my head, stomping my feet on the floor, pumping my fist, and giving the horns for their whole duration. But my favorite part of the whole performance came when the band managed to successfully pull off a cover of the late David Bowie’s “Moonage Daydream”. Needless to say, I came out of the Aragon Ballroom converted to a fan of the Eagles of Death Metal.

But the action didn’t come until Mastodon stepped up to the stage, pulling out all the stops for their performance. For their 90 minute set, these five guys from Atlanta proved how musically diverse one metal band could be. From the jazz-like sounds of “Bladecatcher” and the thrash jams of “Megalodon” to the prog-rock and psychedelic motifs of “Oblivion” and “Andromeda”, respectively, Mastodon showed off their incredible talent over the course of this impressive set list comprised of songs both old and new. Building on the emotional themes poured into their latest album, the band made sure to put every ounce of emotion collected from their arduous struggles into the show. This emotional output culminated with the vicious war dance that is “March of the Fire Ants”.

In the end, I left the show feeling satisfied and recharged, both emotionally and creatively. While it may not have been one of my favorite shows of all time, Mastodon did put on a show that I won’t soon forget.

-Excellent performances by opening acts.
-Put their emotions into the performance with their usual sonic heaviness.
-Solid song choices from the new album "Emperor of Sand" and older albums.
-Closed the show with words of gratitude to the crowd.

-Not much crowd interaction between songs.
-Minor technical issues seemed to ruin the built up momentum of the setlist.

An amazing and emotional performance by one of metal's best acts, supported by two amazing rock bands

Born in the Chicago suburb of Wheaton, Dave has laid down his soul to the gods rock n' roll. He attended Columbia College Chicago as a major in Creative Writing. Some of his favorite things are heavy metal and pizza.
More Goodness
concert reviewhard rockheavy metal

Lost and Found at the Lumineers

In Review: Underrated, Rejuvanated Pop-Rock at 5 Seconds of Summer

Dead and Company Completely Own Bonnaroo

In Review: The 1975 at Durty Nellie’s
Be the first to comment!
Leave a reply »

Dola Is “Running in Place” as Mystery Dies
5