The only description for their project reads, “To be young and unenthused by the perks of rap stardom.”

One of Canada’s best kept secrets has to be the harmonious trap duo known as 88Glam. 88GLAM 2 is a project full of diamonds in the rough, with the rough being nothing but exposure.

Following in the recent steps of Toronto standouts like Tory Lanez, Nav, and the biggest rapper in the world, (sorry, Soulja Boy) Drake, the pair of Derek Wise and 88Camino are slated for a monstrous 2019.

88Glam 2, the sequel to their eponymous 2017 debut project, 88Glam. The sequel is a balanced, vivacious compilation of songs for any mood.

The project has two features from Gunna, and fellow Toronto native and XO signee, Nav, the tape accumulates to a sound that is truly 88Glam. With a plethora of production spots from collaborators like, Take a DayTrip, the producers are responsible for the underground anthem gone mainstream, Mo Bamba, the album offers depth and bangers.

The transition from “Kitchen Witch” to “Snow Globe” is a perfect example of the fluid versatility that their ethereal sound Wise and Camino tap into.

Give the project a listen below. 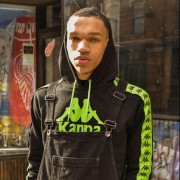