Although Pure Comedy was written predominantly in 2015, it might be the album most indicative of 2017 on this list.  The title track of Father John Misty’s third studio album is a ruthless dissertation on the modern human condition.  The cut “Two Wildly Different Perspectives” is a painfully accurate portrait of American political discourse in the Trump era.  Where Father John Misty’s last record I Love You Honey Bear was a raw and delicate, Pure Comedy is scathing and relentlessly political.

“I have lost a hero/ I have lost a friend” St. Vincent’s Annie Clark reflects on her standout track of Masseduction, “New York”.  The album paints a more personal and subdued story than her previous work.  Masseduction is a rumination on failed relationships and heartbreaks that is both heartbreaking and lovely.

Leave any conceptions about modern popular music at the door with Fever Ray’s sophomore effort, Plunge.  Rabid and energetic, Fever Ray lives up to her exclamation, “Destroy boring”.  She does not wait for anyone’s judgments.  Plunge  is unapologetically eccentric and blunt, a perfect fit for its time.

The once jagged and edgy Tyler the Creator is now vulnerable and matured.  Flower Boy drops the tough guy act for jazz-influenced chords, colorful lyrics, and a coming out statement.  Tracks like “See You Again” showcase Tyler singing abilities boldly, a move rarely done in his previous albums, while cuts like “Who Dat Boy” are a nod to his fanbase that he is still a skilled MC.  He weaves these abilities together to create one of his strongest albums yet.

In an industry dominated by trap-influenced beats, Black Origami is a refreshing take on modern dance music.  Through tabla riddled spasms and world music inspired instrumentals, Jlin finds her sound in the power of percussion.  Through Black Origami, Jlin has created a new landscape for electronic music.

With Take Me Apart, Kelela introduces a new style of R&b with an electronic twist.  In the artist’s debut album, she wrestles with her different identities of being black, a woman, and from an immigrant family, while finding her way in her relationships.  Take Me Apart  combines hip-hop and electronic influences to create an intricate story of vulnerability.

After Beyonce’s Lemonade, everyone awaited Jay Z’s response to his infidelity.  With 4:44 Jay Z returns to his roots to repent for his wrongdoings.  The title track, finds him in rare form, calm and collected, but humiliated and apologetic.  Cuts like “The Story of OJ” reflect on his experiences of being a black man in America, while “Legacy” offers solutions to problems he sees in his community.  4:44  is a deviation from Jay Z’s usual sound, but is refreshing while restrained.

SZA began 2017 not knowing whether her dream of releasing a successful studio album would ever be realized.  She is ending the year with a platinum record under her belt.  Ctrl tells the heart-wrenching story of modern relationships through SZA’s experiences of infidelity and mistrust.  Tracks like “The Weekend” give listeners another perspective in the much-uncharted territory of the mistress in a relationship, whereas “Love Galore” and “Supermodel” are raw meditations on her own self-doubts in romantic pursuits.  In the world of Tinder and new modes of flirtation, Ctrl is an album any single “20 Something” can relate to.

2015’s To Pimp a Butterfly saw Kendrick Lamar finding and cementing his place in the rap game, by bringing stinging commentary of race and depression, while struggling to find his footing as a celebrity.  This year’s Damn found Kendrick dropping the jazz and funk influences of his previous work, for a record with more pop appeal.  The breakout single, “Humble” took the Billboard music charts with its catchy chorus and honest lyrics.  Damn brings a new era of Kendrick Lamar, a more light-hearted and a prideful artist.

Lorde stunned the music world with her release of “Green Light” this March.  Her usual teenage angst matured as she mourned her lost relationship with poppy ballads.  Lorde retreated after her debut Pure Heroine, but she emerged this summer with one of the strongest records of the year.  Melodrama follows the young artist’s journey through the emotionally intense late teenage years, within the context of her breakup.  Starting with “Green Light”, we see Lorde put herself back together, while tracks like “The Lourve” find the artist trying to salvage the golden moments of her relationship, though it is now over.  Lorde makes peace with her choices as a young adult in her final track, “Perfect Places”, as she realizes that there is no perfect place or perfect action that would have saved her relationship.  Being a young adult can be tumultuous, terrifying and of course, melodramatic, and Lorde turned teenage anxiety into a work of art. 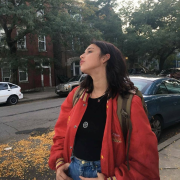 I'm a journalism student in Chicago who loves music!

Art Inspired by Quarantine: A Break From the Seriousness