TOP 10
All Time
1
Zero Gravity Got Grounded
2
Griswolds Vocalize “High Times” in New Album
3
The Summer Set Announce Break-Up
4
Fyre Festival Crumbles Amidst Organizational Chaos, Leaving Hundred...
5
On the Dark Side of Festivals
6
Summer Camp : Who, What, Where, When and Why Are We Moving?
7
Bassnectar Leaks Info About 3-Day Bassnectar Curated Camping Festival
8
Album Review: Joytime by Marshmello
9
Chicago To Be Home Of EDC 2015?
10
Electric Forest 2016: Where Our Minds Were Awakened
previous
Firsthand Account of Forbidden Kingdom Festival (You Really Missed Out)
random
next
The Menzingers Announce Record Store Day Exclusive Vinyl
1 like 0 comments

Grandace stays in tune with his vibes and remains unapologetic for it. He gears his listeners up for streaks of summer on his sun-shiny February release, “Go.”

On his newest release, the musically-inclined poet from Dayton, Ohio breaks the mold on an ethereal beat. Finding personal truth between the lines of anticipated success, and the same underlying passion for personal freedom from the perceived standard. These notions lead to the realization of our generation’s sameness of difference, which is shown in lines like:

I Coulda sworn I saw an alien but everybody’s different now.
Really spot a difference how?
Actually your missing out.
A whole world centered round characters.
Tryna be ethereal.
Got our own channels , disappointment In the living room and wait.
Don’t preach at me I’m not here for all.

These realizations lead to Grandace eventually understanding the need to sometimes “Go,” which he harmoniously bellows to his own conscious and anyone else willing to share his thoughts.

If you can catch the vibes, watch Grandace’s elaborate video for his song “In My Mind,” directed by creative collective, HiveMind, and look out for more GrandAce in the near future. 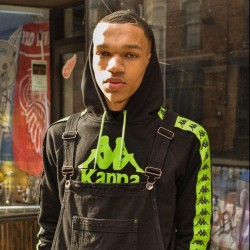 Clarence Taylor III is a Senior at Eastern Michigan University studying Journalism with a Spanish minor. He also works as a videographer, and is co-founder of NVRCH Fest in Michigan.

Lost Lands 2017 Spotify Playlist
Be the first to comment!
Leave a reply »

Valee: A New Wave of Music
3

What Circles Can Teach Us About Elegantly Navigating the Posthumous Release (Or, Skills We Wish We Didn’t Need)