The 2015 summer was arguably one of the best. Lollapalooza only rained out at the end of the last night, we watched in awe as Foo Fighters’, Dave Grohl broke his leg in Sweden during a concert and finished said concert while sitting in a chair high on painkillers, and we continue to see Taylor Swift’s seemingly never ending string of guest appearances. Overall, the summer of 2015 summer was very nice to music lovers. However, four things made a splash this summer that deserve  honorable mention, or at the very least, a nudge to future concerts to do more of this.

For anyone who went to Lollapalooza and was jealous of the people with the sick tie dye body paint on their arms, definitely check out Black Light Visual. Black Light Visual’s founder, Brad Lawrence had been dipping arms in acrylic paint for four years as therapy for tendinitis for his wrist from drawing. Black Light Visual just recently got into dying people’s arms at concert. Patrons are able to choose their favorite colors and dip their arms in the technicolor paint bucket to get their sleeve. And if smearing is what you’re worried about, Brad’s got you covered stating that the paint is meant to last all day. He even has ultra violet paint that’s designed to be showcased at night. “We’re just trying to get as many people colorful as we can,” said Brad. His business made its debut at Lollapalooza and were present at Electric Forest. Brad, fortunately for us, plans on following the concert circuit to TomorrowWorld in September and who knows where else. And for those people who aren’t too keen on wearing their art on their sleeve, Black Light Visual also has an amazing merchandise store where they tie dye dip backpacks, tee-shirts and other accessories.

Temporary Tattoos of the Schedule

If sleeves aren’t your thing, Lollapalooza also brought another first in making a temporary tattoo of the performances of the day. Though by midday you probably have smeared it or lost bits of it through the heat and sweat, this was still a brilliant idea! This is one innovation that many concert goers would love to see in the future. It’s sick! It’s convenient! It’s definitely on the wish-list to have for upcoming concerts 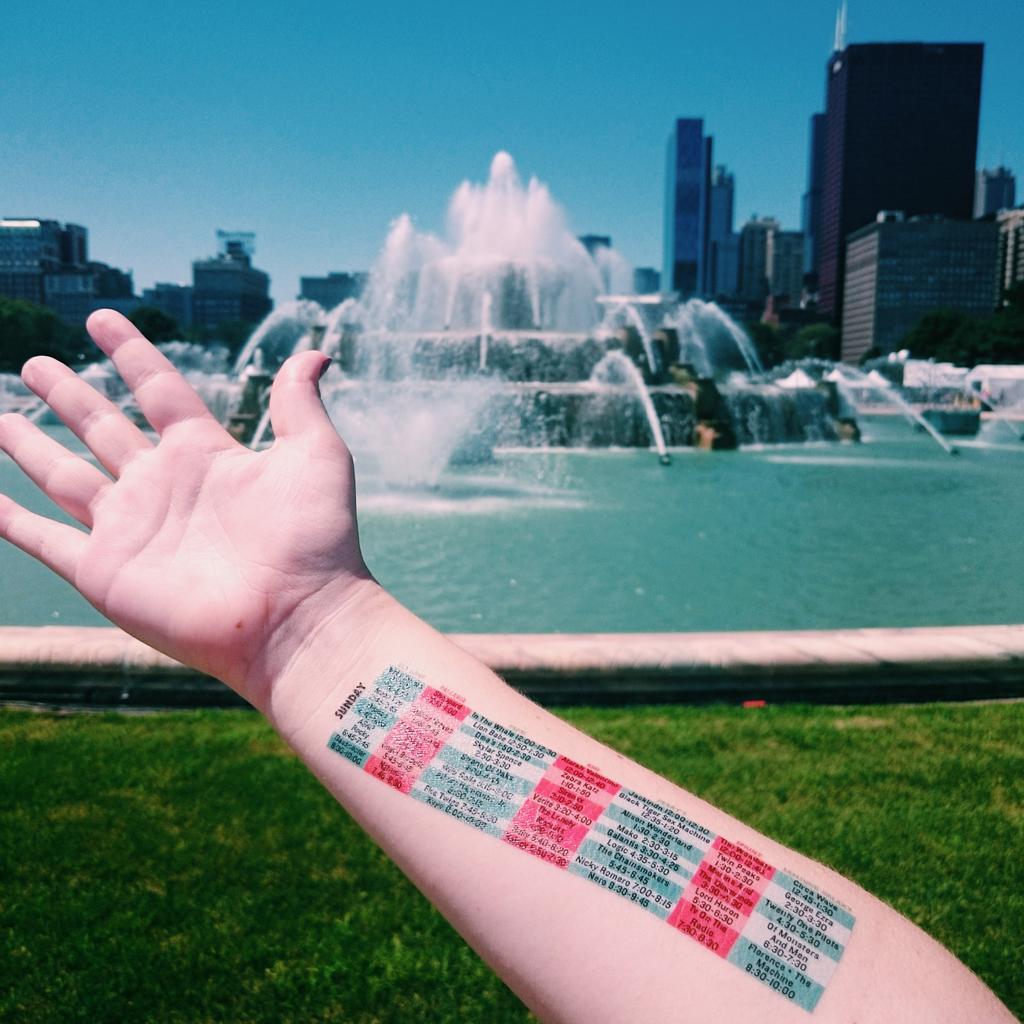 Let’s face it, you can’t be at every concert. However, with Live Streaming services such as Live Media Group, you can be. Live Media Group allows viewers to alternate between four stages at high definition. And even if you’re at the concert, streaming means that concert goers don’t have to feel obligated to record as much as possible on their phones. A recent study shows that 31% of 18-34 year olds use their phones during half of the concert or longer. “People want to remember it,” said Brad Sexton, President and CEO of Live Media Group. “Half the fans in the audience are sitting there recording pieces of the performance because they want to take that with them. They want to take those memories away from the venue after on the performance.” Live Media Group hopes that professional streaming services such as theirs can enhance the concert experience. Live Media Group streamed performances from the Summerfest and Tomorrowland. Live streaming is definitely something to look out for.

The genesis of Apple Music brought one of the most refreshing gifts to Music lovers this summer in Beats1 Radio. From the initial release, Beats1 Radio continues to intrigue music listeners. Besides consistently providing on point music to listeners, World Renowned Artists have lend their musical expertise and voice for their own hourly shows. Some of the artists that have made their own artist-run shows are Dr.Dre, Elton John, Drake, Pharrell, St. Vincent, and Run the Jewels. It’s unknown if other artists will commit to a weekly hour long show, but one can hope as Beats1 Radio provides a refreshing, retro radio station vibe that continues to bring listeners back.

With this summer coming to a close, we can only hope that we see more of the above. Time will tell what the next concert season will bring. If there’s anything we missed, feel free to leave a comment below on what you thought was the big highlights in music for the summer of 2015.

A New York native raised in Vernon Hills, Illinois, Kane McLoughlin is a well traveled writer with a deep passion for reggae, punk-rock, and any pretty much anything you can chill to.

Marshmello to Take over the Summer with a New Album: “Joytime III”

Want a Job in EDM?